15th Anniversary of Rajiv Gandhi (May 21) 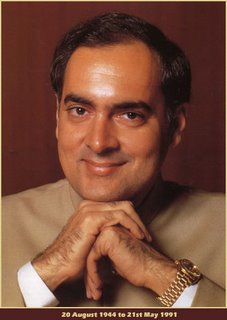 15th Anniversary of Rajiv Gandhi (May 21)

If you had been watching Mahabharat Episode by B R Chopra, there is a small timewheel which comes and narrates in brief about the current occurences. Just thinking about May 21 and its significance. This day, about 15 years ago (in 1991), while coming for a normal election campaign, near the little peaceful satellite town called Sriperumbudur, he was brutally assassinated by a human bomb. The time wheels have rotated so fast and 15 years have fled fast. India has seen so many elections after that but the only thing that is still lacking is the introduction of peace and prosperity in the country.

Even now, at the time of election campaign, a private Television Channel was alleging that a peer political party and its leader was helping out the relatives of assassin. They were framing out in a more rhythmic Tamil "Edharkaga Indha Kaimmaru" (Why is this gratitude to the brutal assassins?) The dirty politicians in India are trying to raise their ugly heads everywhere.

It was really a horrible incident on May 21, 1991 regarding the assassination of Rajiv Gandhi. India can never try and get another able leader like him. He was very much instrumental in even bringing in peace in the neighbor country of Sri Lanka, where Indian Peace Keeping Force (IPKF) was sent during his regime. It is said that the Liberation Tigers of Sri Lanka got enraged only because of that and his name got included in thier hit list.

Well! The past is past. Let us observe a two minute silence and pray the Lord Almighty to give peace and have the noble soul of Rajiv Gandhi to rest in peace.