Google's Plus Venture into Social Networking

After a long hiatus following a catastropic failure of Orkut, Buzz and Wave, the next big leap of Google into Social Networking is Google Plus. At the outset it looks appealing and promising competitor to Facebook but is it really going to stay for a long time?

A few observations on Google Plus are: 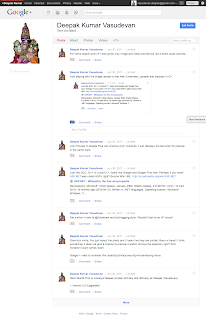 These are a first few observations on Google Plus. Let me tour around more and keep updating this list.
at July 10, 2011