This year 2010 had been a little hectic on Saatvik and we can see increase in Tamas, Rajas levels beyond normal tolerance thresholds. Sri Kalahasti witnessed a crash of its gopuram. Two other temples developed cracks in their historic temples. They are: 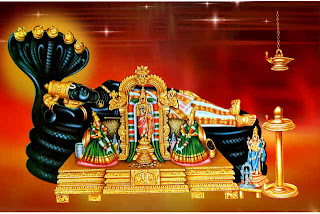 At least now let the world awake of its deep slumber in mundane avaricious bestial pleasures lest they shall be wiped from the face of the earth.
On a side note, this incident also brings to the forefront my another flirting with Sri Ranganatha. Due to a few illicit low profile people's weird and crazy moves over a distant-family feud there were interesting developments when there were accusations on the Lord itself. The move diagnolly superimposed on the fact because one of the opponents were voicing his opinion over Ayyappa in a much disgusting and clandestine fashion.
One of the open curses against Ranganatha for being such a  quiet dumb-ass is that He would need to pay heavily in the long run. Just like Gandhari's curse that Krishna's entire Yadava lineage gets wiped out and that the most befitting reply in this context to that would be even that the temple town of Srirangam being devoured by a quake.
I used to wonder whether that incident was ascending to weird sporadic heights but now I realize that Ranganatha Himself has acknowledged and accepted the folly of the people who hail from His temple town. As a token gesture, the temple gopuram has developed cracks in less than an year.
I believe at least now the Srirangam people should realise their folly. If they can not I would say let them not stay and pollute the temple city and I would be most glad to suggest for the devout people there to start a 'Quit Srirangam' movement against the offenders.

Tip: Some of you might realise that I have openly scolded the god as a 'dumb-ass' here. For those who have a low resolution I would like to clarify that God is everyone' property. Just go through the following bulletpoints and you would realise the eternal knowledge:
at September 07, 2010