Whoa! Just got a Google Plus Invite ...

Glad to receive a Google Plus invite -- a new response to Facebook from Google. After a long sojourn journey of Google with its botched up Orkut project, I think, in its Facebook perspective, the plus seems to be promising. 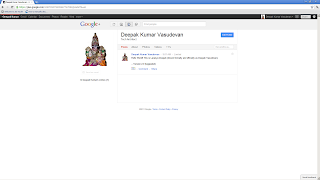 Historically, ASP.NET was called as ASP+ and then rechristened as ASP.NET. Wish Google, good luck in its plus project.

sweet! May I have an invite too please :) mkuziva@gmail.com

Cool! Can you send me an invite? gauravr88@gmail.com

Cool! can you send me an invite?
gauravr88@gmail.com

could u send me an invite to google plus ?
thanks in advance:)
oru invite kodukka mudiyuma ? pls :)
defdesk@gmail.com

could u pls send me an invvite
thanks :)

Hi. Can you please extend the an invite at the following address, if not already consumed.

Hi. Can you please extend the invitation at the following address, if not already consumed.