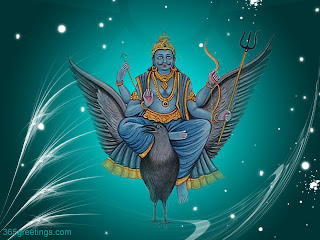 This weekend program of Mahima Shani Dev Ki  is emphasizing the need of our name to be Saatvik  and its effects on our outlook to the world.

The Plot: In the story, the prince rebelled against his father in the coronation and banished his father in Aurangazeb style besides taking his own name as 'Dur-Vijay' in a gesture of temerity to terrorize the world. His sins blinded him to such an extent that he misused his mystic powers to challenge Indra and even to force the apsaras succumb to his lust. Shani intervened in his malicious efforts to penalize him in a very extreme way but narrowly allowing his life. His life was spared because his wife was very pious and god-fearing.

Shani did forgive him at the end because he 'realized' his folly and openly demanded heart's true apology from everyone that he inflicted hurt and on whom he had hurled abuse upon.

I prostrate before Shani and saluting Him for giving a sneak preview of this knowledge to me several years back thereby gifting me my pen-name which has almost now on-par my statutory name now. You can find out the narration here.  Bolo Shani Dev Maharaj Ki -- Jai.