Security of Women Under Serious Question 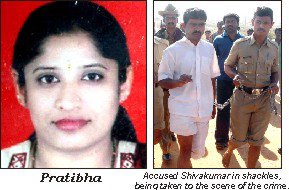 Security of Women Under Serious Question

With the incident of Prathiba Srikanth Murthy getting raped and murdered by a brutal beast driver, Sivakumar, it has come to limelight that BPO organizations and the police should wake from their deep slumbers.

The more shocking thing is that the most safer, secure place of Bangalore to stage this melodrama. This is not just a blog post on some girl working in some call center. Perhaps, we need to see this issue from the perspective of Prathiba or her family. At the moment, the only thing, we can is to pray the Lord for giving mental strenght for the family of Prathiba to bear with this brutal beastly attack. The more pitiable thing is that, Prathiba's mother is a widow, having lost her husband about 5 years back. Reports claim that she is not mentally prepared to come down to Bangalore from Mysore to see her daughter's body now.

Letz observe a 2 minute silence towards praying the Lord for Prathiba's soul rest in peace and for giving her family members the mental strenght to bear the atrocity committed on her. I think the accused needs just not a treatment with IPC (Indian Penal Code) but also a public humiliation, so that offenders like him would refrain from committing such things. It is upto the Bangalore Mahanagara Palike, Bangalore Police to work together to ensure this.

I think, Prathiba's incident is not isolated. There were incidents like Sarika Shaw being molested and killed in Ethiraj college, Chennai about a few years back and Nirmala, daughter of a Indian Air Force office being brutally hit by miscreants claiming to be affluent and powerful potical hands.

It is high time that Government take some real initiatives along with the concerned organizations to put an end to the menace. As Gandhi dreamt and mentioned, the real freedom can be considered only when Indian Women are able to walk freely without fear of any sort even in midnight anywhere.

I fervently hope that the reader should take note of this website on National Commission for Women, which is the apex national level organization in India to protect the cause of Women. Since there are also harassment for women at workplaces, Government of India has enacted a bill to make Sexual Harassment of Women at Workplace (Prevention) Act, 2003. Check out the details of this Bill here.

We are a group of NRIs from Karnataka living in North America.
Concerned about the recent reports of sexual harassment in the offices of Government of Karnataka we have started a 'Campaign to stop Sexual Harassment of Women in Karnataka State Government offices' Kindly have a look at http://tumkurboy.googlepages.com/ for more information.

We believe small efforts like these will go a long way in improving the rights of some sections of our society, rights that are so easily available to some of us.

Good Initiative. Let me know if you need some help from my side too. You can count me in your services.