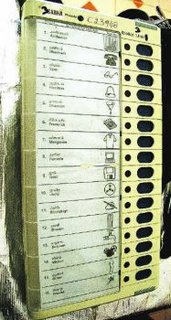 The Assembly elections are fast approaching in Tamil Nadu (May 8) and elections have also started in many of the states of India. It is the prime responsibility of every citizen in India to exercise his right of franchise and cast your vote. With the most advanced Electronic Voting Machine in place, you do not need to waste more time in the queues and exercise lot of hand pressure to affix your stamp in the ballot. Just a click of a button against the candidate's icon would register your choice.

In case you do not have any trust on the candidates that are contesting in your constituency, Election Commission has also brought in a new button called 'No Vote'. You can use this to record your opinion.

Chief Electoral Officer Naresh Gupta said on Monday that some non-governmental organisations desired having an option of "negative voting" by providing an extra button in the electronic voting machines that says "none of the above" clause.

Though there was no scope for negative voting now, as the issue is before the Supreme Court, there were provisions for electors to register their decision not to vote

According to Rule 49-O of the Conduct of Election Rules, 1961, if an elector whose roll number has been entered in the register of electoral rolls in Form 17A, decides not to vote, a remark to this effect shall be made against the said entry by the Presiding Officer and the signature and thumb impression of the elector shall be obtained against such remark.

Also check out this article on the Election Commission of India website: Electoral Reforms

Yes Election Commission should allow voters to use section 49-O.

I totally disagree of its way. It should controlled somehow. Politicians will come to know it by our negative vote only.

Lets see the judgement of Supreme Court in this case. It should come in favour of us.

Secret cameras r onna b used to monitor d way ppl vote.. but hw far will it prove to be useful with d so called power n influence of politicians being so strong dat they cud do anythin they want at any point of time???

This bit of informations are fine. But will leave an additional note, that if young people vote our good personalities. Because one good 5 year, reall good one is needed to remove the strong holds of the old and filthy politicians. Then from hence forth "power n influence of politicians " this factor will go off. Need to wait for a base framework to be proper atleast once.