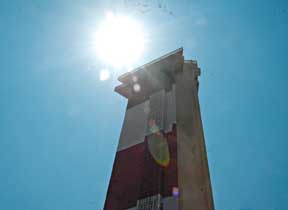 The summer normally spans the period of March to June/July in Chennai and South India. With the incessant rains that Tamil Nadu recieved during November to January, there were unconfirmed predictions that summer is going to be too hot.

There were'nt any quantification of the term 'too hot', which the nature itself is trying to quantify now. With the summer having begun on March 1st for this year and yesterday was the highest heat record in Chennai. It was close to the heels of 42 degree C (about 105 degree F). It is said that this incident is recurring after a period of 10 years since it was observed on May 23, 1980 as 43 deg C [Nungambakkam Met Office] and May 21, 1910, it was recorded as 45 deg C [Meenambakkam Met Office]

The afternoons, everyone is trying to get locked up within the houses and workplaces under the comforts of either full-speed electric fans and/or air conditioners/air-coolers. Inspite of that, thanks to Tamil Nadu Electricity Board, who makes a humble effort to remind the citizens of thier power services and also about the summer season that every one hour, they just toggle the power supply off and on.

There are predictions that this heat wave is likely to increase and mercury would still soar up high with the onset of Khatiri (the peak summer) which would span for this year (2006) from May 4 to May 28. The acutely affected people because of this heat wave would be travelling salesman, public transportation staff (bus conductors etc).

This directly shows the effect of Global Warming. There had been an undue and unjustified interference of man into Nature's system and hence Nature is passing the effects back to mankind. Perhaps the solution would be grow at least one tree in a house, though it may be an apartment. The tree not only satisfies the summer but it would also serve like a kid in the family.