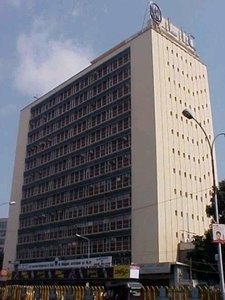 If you have watched a television screening any film that has been shot sometime in 1960 and portraying Chennai city, you can see them focussing Chennai on its erstwhile Mount Road (now Anna Salai) and particularly on the 14-storeyed Life Insurance Corporation (LIC) head office near Santhi theater complex. However, this situation is changing now.

This is not the only tall building now. Every corner you turn now in Chennai, you can find at least a minimum nine-floor building located starting from western end near the Chennai Airport towards the far east near Marina Beach or from ECR in the South to Minjur in the North or North West towards Tiruvellore. Real Estate and particularly industrialisation and constructions with multi-tenanted buildings have been a common figure in Chennai.

In one way, is our City capable of handing this tremendous growth of industrial development and population? This is one such question that needs an answer both from the district administration and from the people itself. The alarming rate in which the city swells both in its static and floating population presents and accompanies with it a lot of problems like traffic, ground water, atmosphere pollution, employment and basic amenities like hospital etc.

The lush green areas of Chennai are now a very rare scene since now the city has become a concrete jungle all over. With the expansion and tremendous growth of IT (Information Technology) industry, the number of skyscrapers hosting and serving as IT Parks are also on a fast paced growth. Small industries are selling off to property developers and large scale IT parks are developed. One advantage of IT parks is that they are non-polluting and have more export potential adding to the national exchequer income.

But in a way, I would put, development of IT Parks is a great boon to the country since it is both nonpolluting. The only thing that needs to be taken care is that more of afforestation and ecological preservation for the longevity of earth life.
at June 20, 2006

When we compare to Bangalore, Chennai can really handle such expansion as it has very good scope of expanding beyond city. In my opinion the TN goverment is doing good job in terms of infrastructure. Now I had vistited almost all main areas in chennai, I find roads r good. The drawback I see here at Chennai is people are arrogant, no traffic sense, no decency (spitting all over, sometimes spitting on people too) and the well know climate (which noone can do anything)

Thanks for visiting and sharing your views. As far as Bangalore is concerned, it was modeled as a tourist spot but slowly was converted to a business hub and Silicon Valley of India. The climatic conditions, tourist attractions there and in its vicinity are also standing testimony to this. It would'nt be exaggerating to call Bangalore as a 'heaven on earth' too.

Chennai inherits business sense and environment since British Raj times, since it has a good coastal harbour. Now it has an international airport too. I do accept that people in Chennai summararily lack civic sense in all ways than one and I think any reader would accept the series of chargesheets that you have tried to book on Chennai citizen culture. :) :)

Just wanted to share about the rampant construction of flyovers near Guindy. Did you notice about the amount of demolitons that have been carried out near Kathipara junction?

Aptly said about Chennai, the once sleepy metro is now evolving into a Major International City with the advent of the IT boom. However, I feel that the city planners are still too slow in infrastructure creation and implementation!!! With the city growing by leaps and bounds, we need new and better roads to say the least. As regards architecture, Chennai now has a few good modern buildings, however there are really no skyscrapers to speak of. I think Chennai needs to have atleast a few landmark skyscrapers defininig the skyline and show that we have indeed arrived. Civic sense and traffic sense in Chennai definitely needs to be improved if we are to remain a world class metropolis. Educating the public at large through awareness programs is the answer to this.

You are absolutely true. A lot of buildings have been demolished near Guindy Kathipara and Pallavaram (near Airport).

There are also much hue and cry from the residents of Pozhichalur, Anakaputhur and Pammal since the government is trying to acquire the lands for Airport construction.

I have discussed about demolition becoming business here.

We agree your views. All that is needed is whole-hearted and committed complete public awareness.

I have something to discuss about Chennai with respect to the widespread spitting culture. Read here.

Why can't Chennai have landmark buildings like the LIC BUILDING? Many tall buildings are coming up all over the city but they are just plain boxy types. I wish the architects and real estate bigwigs in Chennai design and put up more aesthetically pleasing structures that could indeed be called landmarks in the upcoming skyline of the new Chennai. Oh and by the way, how about a tall tower with an observation deck and/or a revolving restaurany et al. That would be the ultimate!!!