Looking back seven years. It was the time when Atal Behari Vajpayee, the then Prime Minister of India, completed successfully his Lahore Peace Trip and India was celebrating the success of the same. At the same time, Pakistan was busy putting its pawns in place for a war with India.

Tough battlegrounds, rough terrains, inhospitable climate did not deter our Jawans in the Indian Defence Forces. Several soldiers laid down thier precious lives and the enemy got a stiff opposition and chased from the Indian soils. 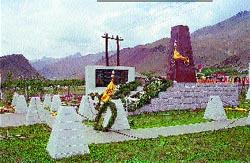 It is now seven years since the pride and glory of India has been saved and restored from our enemies. To commomorate this and pay tributes to the brave soldiers in the Kargil war, July 26, when we got the victory in the war has been observed as Vijay Divas.

Let us pay a two minute silence to the Veer Jawans and pray the Lord Almighty to give enormous strenght and all comforts in all terrains and also to pray for the welfare and prosperity of thier families.
at July 26, 2006