Varadan comes to Virginia on His Garuda Seva

Varadan comes to Virginia on His Garuda Seva

It is Kanchipuram Brahmotsavam time this week and on 5/27 it was the world-famous Garuda Seva. Varadan's Garuda Seva had been more closer to my hearts in more ways than one. All important events like my Upanayanam, Wedding, College Life and Career Life gets started in a close vicinity to His Vaikasi Visakam Garuda Seva.

This year just about a few hours after Gopura Vasal got completed at Kanchipuram a friend of mine immediately sent me the recorded video via email. It arrived at my emailbox at around 1.40 AM Eastern Time (that is around 11.10 AM) when Varadan would be starting back from Periya Kancheepuram to His chinna Kancheepuram.

I have shared about the Garuda Seva in my Sri Vaishnava Network.

It is not uncommon for Varadan to ensure His dear ones are always satisfied and blessed with His darshan. The very famous Thottachar Sevai at His Gopura Vasal is another salient and succinct example. It was because one of His devotees (Swami Thottachar) from Thirukkadigai (now Sholinghur) was unable to travel to an year's Brahmotsavam because of aging effects. He was very much depressed. The Lord blessed Him by giving darshan of His Garuda Vahanam right at Sholinghur. It is hence even these days when Varadan is about cross the Gopura Vasal the divine umbrellas cover Him in a divine belief that the Lord is at Thirukkadikai for a while giving darshan to His devotee. 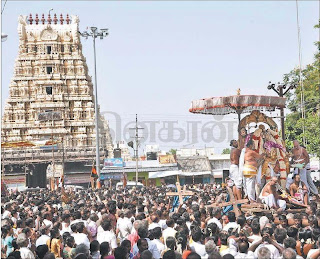