The Most Popular Indians in the World

The Most Popular Indians in the World 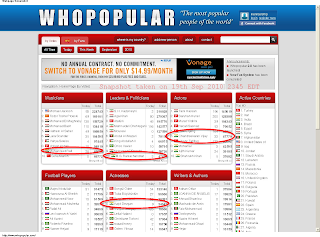 Ilayathalapathi Vijay tops the list from India for actors section. Kudos to Vijay. Super thalaiva! From actresses, Kajol Devgan, Mohammed Rafi from musicians feature on the list. It is noteworthy that (Late) MGR features the list in the politicians of repute and should be significantly observed in the eve of upcoming General Elections for the Tamil Nadu assembly.
at September 19, 2010

Email ThisBlogThis!Share to TwitterShare to FacebookShare to Pinterest
Labels: discovery

Very interesting find. Thanks for sharing.