I have been supporting the technical building of the website of Astrologer Vighnesh since 2010 but I do not strongly encourage astrology and those pariharams-palaharams concept. However of late, the pesky trouble from Astrologer Vighnesh in forcing me to reviews in support of him in third grade websites like Sulekha seems to be increasing that I reported the messages to pertinent authorities. 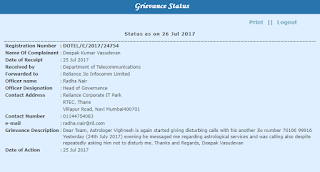 I had also escalated the issue about this to Sulekha team. You can check out the full complaint over here.

I have also re-edited the Google Review for him considering the steep disturbances he is giving for the past few days (now deleted). The text of the review is below.

Also, I am getting irritated by frequent pesky messages from the service provider soliciting reviews on third party websites like sulekha surekha and hence I am forced to re-edit the review.

Also I am an athiest following rational ideologies. I do not have beliefs in all these spiritual astrological pariharams and palaharams. Despite repeatedly telling that I am only suggesting him on the technology front for the service provider website, the service level solicitation is a big irritation.

Also considering other astrologers I feel the payment terms is very steep. 2000 for India and 150$ for US will only restrict to higher end customers.

For some reason this astrologer does not converse in Whatsapp but only make voice calls and that too in odd times.  As of yesterday night it looks like Jio and Sulekha had been banging on him and in retaliation he has blocked me on Whatsapp and not responding to emails too. :)
at July 25, 2017

Email ThisBlogThis!Share to TwitterShare to FacebookShare to Pinterest
Labels: escaping from grudging and envying people, experience