Are we trading humanitarian attitude for modern life?

Are we trading humanitarian attitude for modern life?

These are the some of the common words that we could hear these days. Are we cheating ourselves or pretending to be modern and busy? Even the most common desktop application that we use (Microsoft Office) has lively animated characters like Rocky, Merlin, Links which makes to shed the mechanical shell ego and support and breathe the live world. Rocky never appeared as just another dumb animated character built out of Agent Character SDK. Whenever, any of the Microsoft Office application or even its Windows Search (from XP or higher) is open, the desktop becomes more vibrant with more liveliness. So what is this discussion for?

There are a lot of things that we ought to learn from Windows XP too. I am trying to describe here two types of incidents. First cruelty to animals. Second nonchalant attitude (passive cruelty) to mankind.

A few incidents that made me to write this:

Last sunday, I found a small dog near my house run over by a two wheeler. When initiatially surveyed and investigated the neighbors, it seems the run over happened the previous day afternoon and the dog has been haplessly crying for help for the entire night and till I noticed it the next day morning. I tried to reach BlueCross Ambulance in Velacherry. BlueCross has always been the pioneer in AnimalCare and Rescue services but being a Sunday, thier bad day, they have left the rescue services to some stupid crazy idiots, who did not care to arrive till about 11. I really wonder, whether this would be the attitude if thier own kith and kin would be run over and hence I think Nature is giving so much upheaval then and there in the world by way of TSunami, earth-quakes and so on and so forth. If mankind could still not understand and realize the punishments by the nature, I really wonder, what would be the repercussion from the Nature, which is omnipotent.

Well! After a struggle of two hours, I found one more small animal volunteer in Medawalkam, and they immediately came within ten minutes of my rescue call, took the dog to thier shelters for veternary treatment and rehabilitation.

This is one such incident. The other one being hit-and-run of dog in Adyar Sardar Patel Road, near Adyar Signal. This happened about six months back. The traffic cop, when asked about him reason for bieng mum and competing like the statue post in VGP Beach resort, nonchalantly and silently replied that 'What can I do sir? It is only a dog. There is no legal statute for animal care" Is it true?

Another incident which I found is glorification of run over in public forum. Check out the attachment. The author himself has mentioned about narrow roads filled with people and dogs. And in that, speeding up was a testimony of stupidity too. Had this author run over a person, he would have been behind the bars counting ONE TWO THREE FOUR FIVE SIX and then again SIX FIVE FOUR THREE TWO ONE, for at least a period of seven years, which is the normal minimum sentence given to murderers under Indian Penal Code. 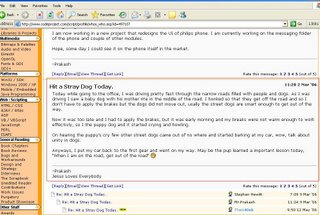 Another blatant aspect of dying humanitarianism was witnessed in Tambaram. It was scorching hot afternoon near Madras Christian College (MCC) campus, East Tambaram. A very much poor man unable to spend much in human labor conditions had to depend on alms for his basic survival. The scorching heat, which we ourselves, under the mercy of Voltas and Godrej products supported by TNEB lines are not able to manage, this poor person was suffering out of hunger. It was actually witnessed by my mom which I wanted to share with the readers.

My mom was actually in the moving bus which got held up in a traffic snarl in the opposite direction. I guess from the narration, he was also a North Indian and he was painfully begging most humbly to the biriyani shop "Bhook lag raha hai. Bahut Bhook Lag raha hai". Hundreds of eaters giving tips to the waiters and waiters busy counting tips from the eaters but no one to give him one (nay at least a handful) to appease his hunger. She was actually saying that two more minutes if the guy could not get any help, she should get down, throw one ten rupees to the shopkeeper and ask him to give one plate of whatever the same is being served to the other persons. Fortunately, the shopkeeper, who seemed to very kind person, and was busy inside, came out and what he thought and did was really praiseworthy. He immediately went in and seemed to have made a parcel of whatever same type of serving is made and gave to the poor guy.

Two things to learn from this incident:

In Tamil Nadu, elders used to say, that only because of good persons, Rain God used to shower His blessings. I think, the rains are coming down in quantity and merciful showers are on depletion only because of depleting humanitarian attitude.

Here is the verses of Thirukkural, which shows good people and humanitarianism alone causes world prosperity and showers of blessings and rainfall to the world. 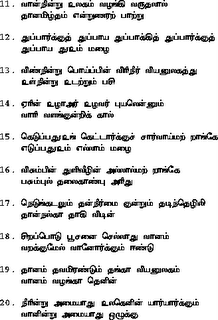 The National Poet of India (Sri Subrahmanya Bharathi), has also supported humanitarian cause in his verses:

I think, it is a good thing, Kalaignar M Karunandhi, has brought in subsidised rice for the poor community. But there is a long pending TODOs for him.

The Government also should bring in some measures to protect and preserve poor people, who live on roadsides. They are also humans. There should be some rehabilitation measures and organisations that need to be instituted. While we waste so much food, there are scores of people eagerly waiting for the rice. Check out my other post here. There should be some streamlined measures by either the government of by social welfare non governmental organizations towards this aggravating and painful social issues.